Honestly, I find most of what goes on in America in December a big turn-off. The intense commercialization of gifting, for one, is a big thorn in my side. (Leave Thanksgiving alone, you vultures!) And I’m not a fan of the Christmas Card Brag Letter. I like to send out non-denominational holiday cards with handwritten, heartfelt greetings to my near and dear to let them know that, busy as we all get, I am thinking of them (not requiring them to think about me). I believe fake wreaths and trees are super tacky and fiercely maintain that putting a Santa cap on something or someone does not make it or him or her innately adorable. Also while Christmas cookies may look good, most of them taste like recycled paper. Don’t even get me started on Christmas Carols (I live above Musical Theater majors) or extreme residential decorations. Most of all what miffs me is the inherent holiday hypocrisy. I mean, if you’re a WWJD kind of person, you have to admit that scheduling all your generosity and compassion for two weeks out of 52 is not the way Jesus would do.

But let me say this: If there is a war on Christmas, I want no part of it. A lot of people, children especially, enjoy its traditions. So why quibble? Let them eat their yule log!

But, if you’re like me, you look for ways to avoid all that sap. And this can be difficult, especially if you dwell among the true believers. Luckily there are clouds and there are silver linings. (Egg nog ice cream anyone?!) So here are some well informed choices you can make amid the holiday frenzy that still satisfy the some-say-cynical-I’ll-take-hypercritical among us. 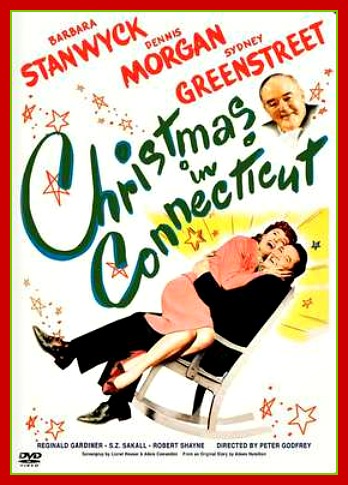 This is far and away my favorite Christmas movie for many reasons. First, it stars my favorite actress, Barbara Stanwyck. Second, it’s really a screwball comedy disguised as a Christmas movie, so it is the reliable balm to my inevitable Christmas ire. Elizabeth Lane is cosmopolitan career girl who writes the domestic arts section for a national magazine, except she lives in a tiny New York apartment and gets her recipes from Felix, the restaurateur around the corner. All runs smoothly until a returning war hero wishes to share Christmas dinner with her family on their farm in Connecticut. She manages to conjure up all the elements of her imaginary life, including her fictional husband and baby, until she starts to fall for the guest of honor. Watch out for another great performance from the wonderful Hungarian actor S.Z. Sakall as Felix.

I love Frank Capra! You love Frank Capra! But if you watch It’s A Wonderful Life every year you’ll ruin it. The man made so many great pictures it’s impossible for me to pick a favorite: Mr. Deeds Goes to Town, Lost Horizon, Arsenic and Old Lace, State of the Union…it’s a long list. Capra’s signature tropes are all present: the everyman idealist who may waver but ultimately sticks to his guns, the too-clever-for-her-own-good girl who games the system only to discover she has ideals too, the supposed rube who called it all from the get-go, and the hard earned happy ending that reaffirms your faith in mankind. It’s all there, thrown together in a variation that you recognize quickly but enjoy every step of the way. And, of course, there’s the Stanwyck factor. (The woman made everything she touched better…even The Colbys.)

The Shop Around The Corner

This is an excellent film that just happens to be set around Christmastime. And it just happens it was made by a very nice Jewish man. But what more can you ask for? Jimmy Stewart? Check. Star-crossed lovers? Check.  A snow-laden Christmas Eve happy ending? Check. And that ending is well deserved. If you’re not moved by the warmth of these two leads and their touching story, your heart is made of stone.

I’ll Be Seeing You

Another example of a sincere and tender romance that happens to unfold during the holiday season, this dear sweet love story is set during WWII and concerns a GI on leave and a seemingly innocent young woman furloughed from prison for Christmas. He has PTSD and is prone to panic attacks and she’s got to return to prison to resume serving her sentence, even though it is for accidental manslaughter, but nobody’s admitting anything. Orson Welles once told Joseph Cotton, “with a regional accent, no training in the classics, and a stubborn resistance to submerge and twist personal characteristics to fit specific roles…I’m afraid you’ll never make it as an actor.” And then after a lengthy pause, “But as a star I think you might well hit the jackpot.” Perhaps it’s Cotten’s star quality that makes me embrace this unostentatious little film, but I highly recommend it. Watch for an endearing performance from an adolescent Shirley Temple transitioning from her frothier roles as a child star.

This is the film starring Barbara Stanwyck and Fred MacMurray that no one talks about. It’s not noir. It’s not notorious. But it is a Preston Sturges screenplay. (And that goes a long way in my book.) This time she’s been caught shoplifting and gets arrested just before Christmas. He’s the prosecuting attorney who postpones the trial and offers to take her home to his family for the holiday.

“I suppose you do this with all the lady prisoners?” she says.

“That’s right,” he replies. “Look when court reconvenes, I’m going to try my best to put you in jail for a good long time. That’s my business, but you haven’t been convicted yet, so I don’t see why you shouldn’t enjoy Christmas like the rest of us.”

For my money, that’s the kind of dialogue that sells Christmas. 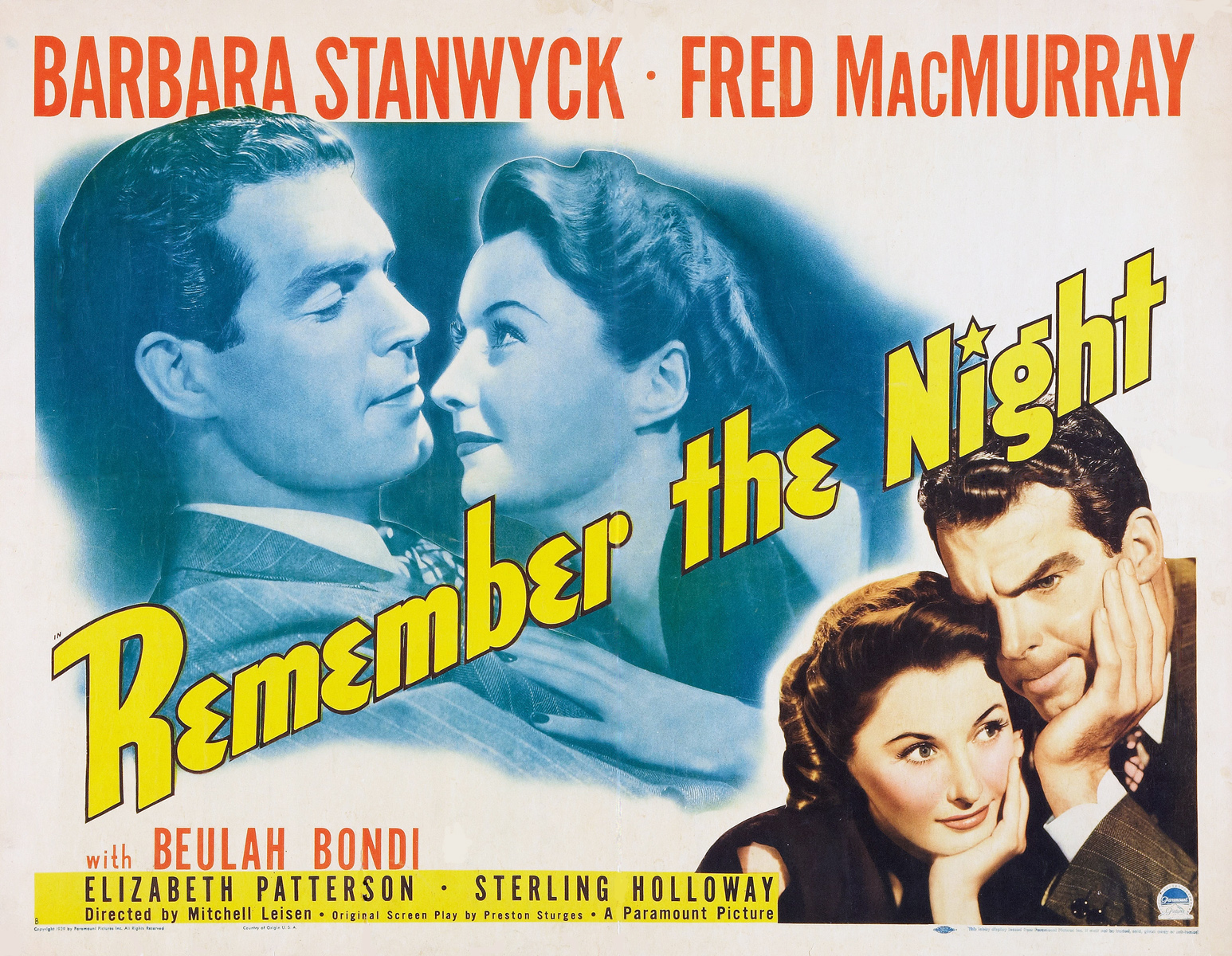 Yet another Christmas by association movie, this may not be everyone’s brand of humor but it hits my guilty pleasure button big time. Ryan Reynolds plays Chris, a former fat kid who transferred his adolescent angst into adult success, but by the most superficial standards. Once he unexpectedly lands back in his hometown for the holidays his hot bod and flashy job fail to conceal that he still cannot connect with anyone, especially not his high school dream girl Amy. He makes a mess of trying to get to know her again and then totally chokes when another late bloomer from high school moves in on her. His old friend Clark is still there for him though and reminds him, “You can’t compete? Are you kidding? You’re Chris Brander. You’re Hollywood, you date models! He’s Jersey, he skis in his jeans.” Getting to where you know we’re going is the fun in this romp and the highlights generally include supporting actress Anna Faris delivering a gut-busting performance as Chris’ record company’s latest star who is waylayed along with him.

Nick and Nora Charles are the dapperest of film couples and the first Thin Man film is undoubtedly the best. So this time it is noir and it is notorious, but it’s barely a Christmas movie. Does that matter? The important part is that it’s on. Tonight! And of course Asta. And, oh right, the murderee is due back home before Christmas, so when he doesn’t show up by Christmas Eve his daughter gets suspicious and gets Nick (and Nora) on the case. Happy now? I connected the dots.

You have to love the ironic touch of screenwriter Shane Black with his penchant for setting his dark yet whimsical films (Lethal Weapon, The Long Kiss Goodnight) during the holiday season when the rest of the world is putting on earnestness and solemnity. This one, in my opinion, is the best of the bunch. Is it a Christmas movie? Is it a caper? Is it a tongue-in-cheek Hollywood insider spoof? I can only say it pretty much breaks all the rules of storytelling and yet I swoon. It’s certainly possible I’m swooning for the two leads, but they’re so much more than pretty faces here. Go ahead, treat yourself!

“I get it. You’re here to show me my past, and I’m supposed to get all dully-eyed and mushy. Well, forget it, pal, you got the wrong guy!”

Bill Murray has done many fine things in his time, but this adaptation of A Christmas Carol may outlive his other achievements…perhaps for being the most irreverent take on a Christmas classic that, ironically, stays true to its spirit. If I start mentioning my favorite bits I won’t be able to stop. Ooh. Ooh. But Carole Kane as the Ghost of Christmas Present is the best!

“Sometimes the truth is painful, Frank,” she says in her high pitched crazy fairy voice and then slaps him in the face. “But it’s made your cheeks rosy and your eyes bright!”

Oh and Bobcat Goldthwait! And Robert Mitchum! You get the idea.

To my amazement this gem doesn’t look to be scheduled on network television or basic cable this year. I’m baffled. Who doesn’t want to watch Judy Davis and Kevin Spacey out-bicker each other so that Dennis Leary, their fucking burglar, has to step in and referee?

“From now on, the only person who gets to yell is me. Why? Because I have a gun. People with guns get to do whatever they want. Married people without guns, for instance, you DO NOT get to yell. Why? NO GUNS! No guns, no yelling. See? Simple little equation.”

You want it and you know it. Because we’ve all had moments when we wanted to yell at someone we’re related to, by marriage or otherwise, and we didn’t…or it didn’t come out as brilliantly as it sounded in our heads. And now we get to sit back and watch the best of the best have at it. Thank you, Ted Demme!

Hillery eventually learned not to say all things that came to mind. Some were too good not to write down.

Hello. I really don’t need any more men talking about what Ruth Bader Ginsburg should or shouldn’t have done. I wish we didn’t have to say this out loud, but here we are.

Stand with @DemandProgress and protect the November election from the coronavirus and @realDonaldTrump by passing a bill to guarantee every voter can cast a ballot by mail! https://act.demandprogress.org/sign/vote-by-mail-november/?source=tt @RepJohnYarmuth

NEW: The OFCCP has announced that it won’t even look at employer data that could uncover pay discrimination by sex, race, and ethnicity. http://bit.ly/2XB2ngf